I’m sad to report that the “Chickenman” and “Tooth Fairy” collectors’ packages are being discontinued.

Several years ago, Dick Orkin personally assembled the only authorized CD collection of the radio adventures of the most fantastic crime fighter the world has ever known…

More recently, I personally oversaw the creation of the only authorized CD collection of “The Secret Adventures of the Tooth Fairy.”

When each was released, we told the world:

“These are limited editions. If you’re a fan, get yours now…while you can.”

We Have Ceased Production of These Two Collectors’ Packages.

There are fewer than 100 sets of each.

When those packages are gone, that’s it. There won’t be any more.

If you’re a fan, grab your copy now.

Or hurry up and order it for that friend/relative/spouse/roommate who always replies, “Yes, I am” when you say his/her name…

…or who says, “Hit it, Raoul!” at the most inappropriate moments. 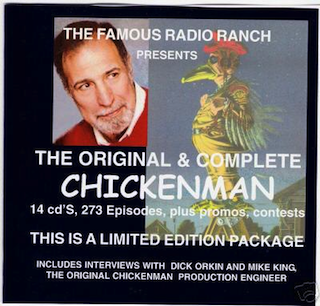 “The Story of Chickenman” numbers 14 CDs and includes: 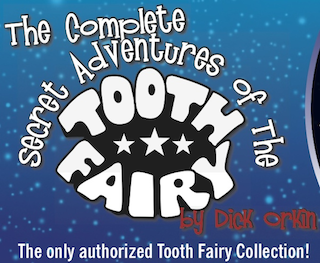 “The Complete Secret Adventures of the Tooth Fairy” contains:

Each of these collector’s editions has gotten rave reviews from fans all over the world.

I’ll truly miss shipping these radio comedy treasures, because I know that each package delivers so much joy to the recipient.

Here is where to order one of the last remaining “Chickenman” collectors’ packages.

Here is where to order one of the last remaining “Tooth Fairy” collectors’ packages.

If you’re a fan of one or both series, please share your memories, favorite episodes, etc. in the “comments” field below.

Next post: How NOT to Make A Car Dealer Radio Commercial