THE DANGER OF REAL TESTIMONIALS IN YOUR RADIO COMMERCIALS

In response to last week’s piece about the legal folly of airing a commercial that, for example, features two of your radio station’s salespeople pretending to be real customers and raving about the advertiser’s product/service, Michael R. Guimond posted this comment:

“Even real ones in the medical world can be considered malpractice according to certain healthcare institutions.”

I don’t know about regulations aimed specifically at medical practitioners, but Michael is correct in pointing out that featuring honest endorsements by real customers can violate Federal Trade Commission (FTC) regulations. 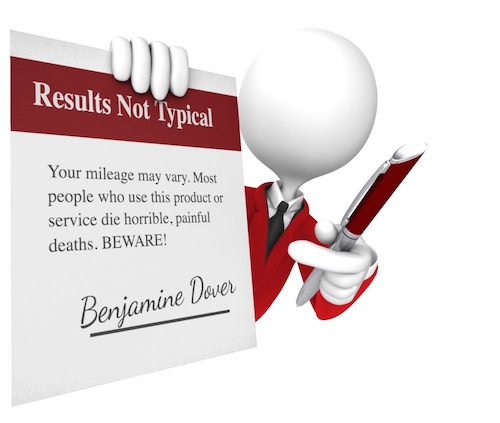 Quoting again from Federal Trade Commission guidelines regarding the use of “endorsements” and “testimonials” (the FTC uses the two terms interchangeably):

“Endorsements by … consumers about the performance of an advertised product or service will be interpreted as representing that the product or service is effective for the purpose depicted in the advertisement. Therefore, the advertiser must possess and rely upon adequate substantiation, including, when appropriate, competent and reliable scientific evidence, to support such claims made through endorsements in the same manner the advertiser would be required to do so if it had made the representation directly — i.e., without using endorsements. Consumer endorsements themselves are not competent and reliable scientific evidence.“

Even a true consumer testimonial cannot be used unless the advertiser can substantiate that the endorsement is typical of the results others will achieve by using the product or service.

“Results not typical” cannot be depended upon to keep you out of trouble.

How to Deal With that Rule About Testimonials

If the results are typical, the advertiser needs to be able to back that up with independent scientific studies (for some campaigns) or a formal survey of customers.

Without such a survey or study, Ed’s Fitness Club shouldn’t run that commercial.

What can that satisfied fitness club member say in the commercial?

To my non-attorney layperson’s understanding, that real, satisfied fitness club member can give an opinion based on her own true experience:

“I’ve been a member of Ed’s Fitness Club for over a year now, and I love it!”

“I’ve been a member of Ed’s Fitness Club for over a year now, and Ed’s has become part of my daily routine.”

“I really enjoy the free water they give me after a workout at Ed’s Fitness Club.”

Are those rave reviews?