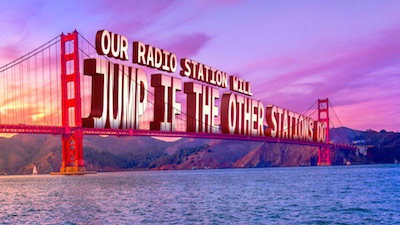 “One of the account executives at my radio station group has a client that is determined to have us use 1st person (we, our, us) in their spot even though we’re using an in-house, on air voice. I’ve explained my position on the issue (the in-house, on-air voice works here, not for the client, so 3rd person — they, their, them — is the appropriate perspective).

“I gave her the option of the client providing an off-air and/or out-of-market voice that COULD do the spot in 1st person, but the AE has asked again, saying ‘These other stations always did it for them, so even though it’s not appropriate can we still do it?’

“This has been a rule of mine for years, but if you think it’s no biggie then I’ll relent and do what they want.”

“And if all the other stations jump off a bridge…?”

I was prepared to write a lengthy “on the other hand…” response until I saw this:

“These other stations always did it for them, so even though it’s not appropriate can we still do it?”

The radio salesperson agrees with you that it’s inappropriate?

Why does the conversation continue past that point of agreement?

Either your station group has clearly defined standards or it doesn’t.

An advertiser’s waving money at the AE should have no effect on your group’s standards.

Next post: First-Person Radio Ad Copy and The FTC