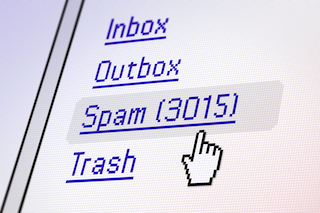 “We have been getting really good response from email blasts.

“Obviously when we do a promotion there is a sponsor attached most times. What are your thoughts of the sponsor being mentioned in the Subject Line?

“Opinion 1: The sponsor will get more bang for their buck if they are seen in the Subject Line right away.

“Opinion 2: Grab the listener with a short and sweet subject line so they will read the email and see the sponsor mentioned there. And putting a sponsor in the Subject Line makes it feel ‘spammy.'”
— Todd Steinkamp

There’s no guarantee that the sponsors will get more bang for their buck if their name is in the Subject Line.

In fact, most of the time it will have the opposite effect. As Opinion 2 states, “Putting a sponsor in the Subject Line makes it feel ‘spammy.'”

If Opinion 2 is accurate, then ultimately your sponsors receive less bang for their buck, as recipients increasingly associate those sponsors’ names with spam.

Your station simultaneously is squandering its good will by sending emails that “feel spammy.”

That’s why we hear so many terrible, money-losing spots that begin, “Sears proudly announces its annual once-in-a-lifetime sale…”

The first line of a radio advertisement has just one goal: to cause the targeted listener to listen to the next sentence in that spot.

An email’s Subject Line has just one goal: to cause the recipient to open the email.

In email marketing, including the sponsor’s name in the Subject Line rarely causes more recipients to open the email.

If it’s not an email they’ve been waiting to receive (“XYZ tickets available NOW”), to generate the largest possible “open rate” (which I hope you’re measuring), your Subject Line needs to be either

A) Irresistibly beneficial to the recipient

Most email marketers are thrilled to achieve open rates (the percentage of people who actually open an email you send them) of 25% – 30%.

Here are the Subject Lines of emails I sent during the past year that achieved greater than 40% open rates.

Will you be with us…for what?? The success of that Subject Line was almost entirely due to Intrigue.

I say “almost entirely” because it also invokes a powerful psychological motivator called “Fear of Loss.” Although they don’t yet know what event is being referred to, part of them can’t bear the possibility of being left out of something that might be really good…

…so they read the email to find out what they might otherwise miss.

That Subject Line combines Benefit (here’s that thing I promised you, and you’re getting the information before the rest of the world”) with Intrigue (most likely they don’t remember or aren’t sure just what it is I promised them).

That’s 100% Benefit…when mailed to a list of everyone who expressed some degree of interest in the Voiceover Marketing Class.

That’s strictly Benefit…to the list of people who asked to be put on my Starting Your Voiceover Business class Alert list.

Once again, strictly benefit. This email doesn’t attempt to “sell” the Q&A seminar. Its sole purpose is to ensure that interested recipients don’t inadvertently miss the event.

While on a subtle level that Subject Line uses another powerful psychological trigger, Scarcity, on a conscious level 54.19% of recipients opened the email to find out what I’m sharing with them while urging them not to share it with others.

Intrigue (warning about what?) followed by Benefit (I’ll learn about something before other people do).

The Subject Line doesn’t say what we’ll be doing in October.

It doesn’t even reveal who comprises the “us.”

Motivation to read the email: Intrigue.

Benefit, with a little bit of sly Intrigue thrown in: How the heck do you “enclose” an audio replay in an email?

100% Benefit (to a list of people who’ve expressed an interest in narrating audiobooks.

Here’s How to Achieve a Strong Open Rate While Guaranteeing a Poor Result.

If your Subject Line succeeds in involving recipients but the actual message doesn’t deliver on the implied intrigue or benefit, you’ll fail.

Your Subject Line is, “5 strokes off your golf game — guaranteed!”

Your body copy, however, continues: “We can’t guarantee our Miracle Golf Club will take 5 strokes off your golf game, but we do guarantee you’ll be amazed at how much farther you can drive the ball…”

It’s the equivalent of rookies whose Subject Lines consist of “Sex!” and whose email body copy continues, “Now that we’ve got your attention….”

Worse, it’s not effective. It actually annoys and alienates your prospects.

With that all of that as background, let’s look at a few of the emails Todd sent me.

I’ve replaced the names of the actual sponsors with “XYZ Co.”

Where you see “Todd” in the Subject Line, that represents the individual recipient’s first name. 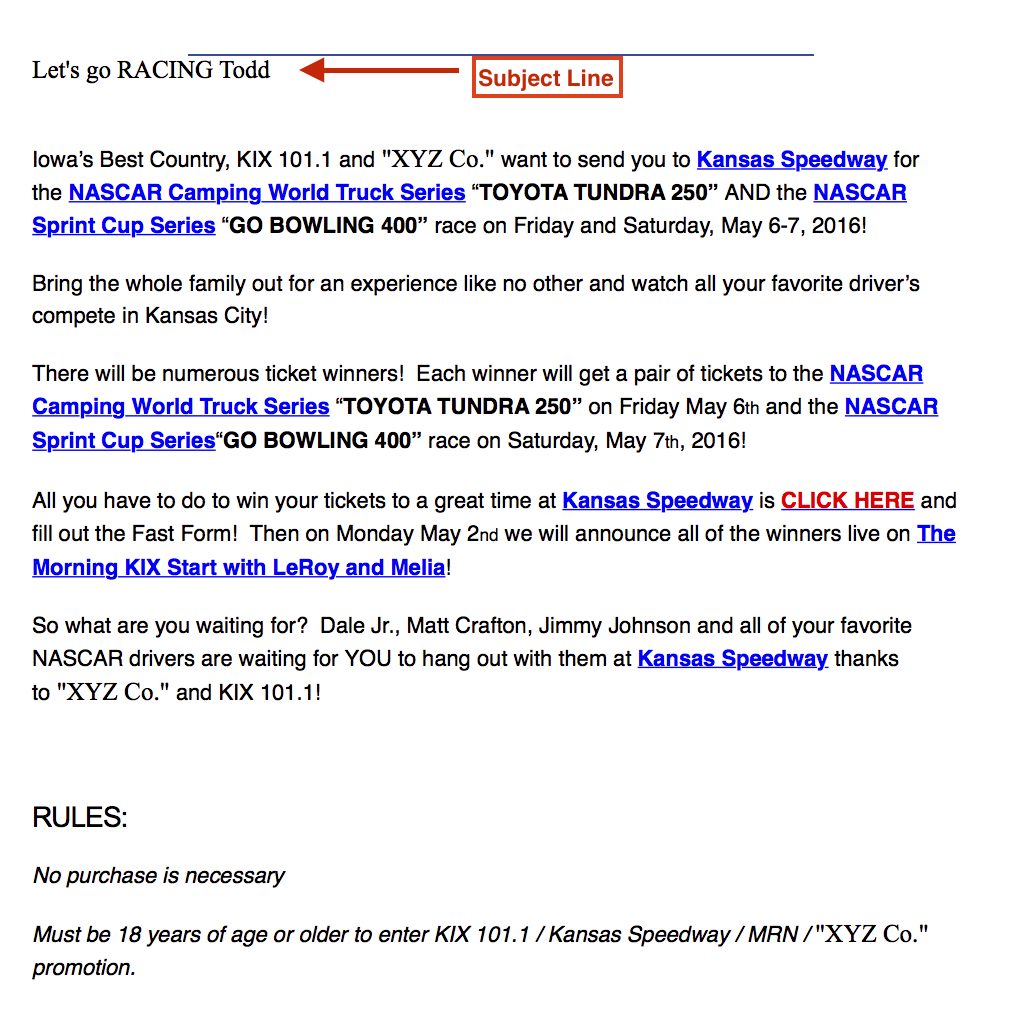 The Subject Line is good if the mailing list is comprised largely of racing enthusiasts. For a radio station’s entire database, it’s weak.

A word about punctuation and Subject Lines: Punctuation isn’t important, but communication is. In this example, the missing comma slows down the reader’s eye.

Comment #1: The majority of the recipients of this email can see the first line or two in “Preview” mode before deciding whether to open the email.

How enticing is that preview? It virtually shouts, “Here’s a commercial announcement!!!”

Comment #2: The entire email is presented in the style of a bad 30-second spot written by a station account executive.

Think about the emails you’re most likely to open and to read. At the top of your list undoubtedly are emails from people you know, written to you in a naturally conversational style…hopefully about a topic you’re interested in.

Just as a successful radio commercial is a conversation between the advertiser and the targeted consumer, to succeed your marketing emails need to be conversational.

This email is filled with information: Name of radio station; name of sponsor; names of the two events; dates, prize; how to enter…

Recipients who might actually care about the information aren’t going to wade through the clunky verbiage that surrounds it.

If you’re sending an informational email to people who want that information, make it easy for them to find and digest.

Hint: Nobody wants to read your radio station’s emails.

Recipients who are interested in the contents want to scan the message. They want the info to jump from their computer screen into their brains without their having to do any work at all.

The Subject Line clearly identifies and sells the benefit.

Recipients who love the Iowa State Fair are likely to open that email.

Is the Subject Line creative? Witty?

No, but it should result in a decent open rate.

That Subject Line won’t generate a lot of opens.

The open rate could be improved a bit by involving the recipient more or by injecting a modest amount of intrigue:

“Here’s how you can win a Patio Party”

“How did SHE win that patio party??”

Although they include an “unsubscribe” mechanism, the emails are not compliant with CAN-SPAM (a U.S. law that regulates commercial email).

CAN-SPAM requires commercial emails to include the sender’s “physical postal address.” Usually that’s a street address (along with city, state and Zip Code), but it can be a post office box you’ve registered with the U.S. Postal Service or a private mailbox that’s registered in your name with a commercial mail receiving agency.

I realize it’s not a very large town, but “Marshalltown, IA” doesn’t contain enough information to qualify as the sender’s physical postal address.

Next post: {video} 12 AUDIOBOOK NARRATORS: How They Did It