From MY Radio Hall of Fame: Chris Edwards 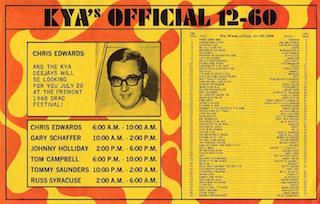 I remember only two radio disc jockeys from my childhood.

Ron Landry Before He Was Famous

One went on to become well-known throughout the industry as 1/2 of “Hudson & Landry” — Ron Landry.

To me, he was “Live and lively Ron Landry, 9 to noon on the Big D, WDRC/Hartford.”

I don’t know what it was that, for me, made him stand out more than any of his colleagues. I remember only:

1) The tag line I cited above.

3) That once on his program I won a contest that provided a model for me to refer to many years later, after I found myself working in radio.

The Model of a Successful On-Air Radio Contest

– Was easy for anyone to play.

– Was easy for everyone else in the audience to “play along” with, too.

– Used sound in an interesting way.

– Was structured so that the longer you’d been listening without anyone winning, the more likely you were to keep listening and to keep trying to become a contestant.

– Incorporated a ubiquitous element of everyday life: the “pay telephone.”

Once Upon a Time, People Would Drop Coins into a Box to Make Telephone Calls.

Y’see, back when dinosaurs roamed there earth, there were these things called “telephone booths.”

They were all over the place.

You’d put in a dime or two nickels to make a local call. A non-local call would require additional coins, often adding one or more quarters to the mix.

Each denomination of coin made its own distinctive, consistent sound.

A dime produced a “ding ding.”

A nickel produced a single “ding.”

Here’s How this Radio Contest Worked.

The audience would hear the sounds of a series of coins being inserted into a pay phone.

One lucky caller would qualify as that hour’s contestant, to play the game live on-the-air.

To win, the caller had to identify exactly how much money those coins added up to.

If the caller was correct, s/he won the jackpot. If it was the first attempt in a brand new round, the amount would be small — e.g., $3.45.

If the caller was wrong, the next contestant had a chance to win that $3.45 plus whatever was the coin total of the next attempt.

It wasn’t a lot of money.

But to a kid, it was some money.

More importantly, it was fun and challenging and engaging and exciting to play.

I don’t even remember what they called that contest. Probably “The Telephone Game.”

That’s all I remember of Ron Landry in his pre-famous days.

The other jock, whom I remember more clearly, had more of a chance to listen to, and was influenced by more was a guy named Chris Edwards at WHEW/West Palm Beach.

Or, as he began calling himself at times, “Big Fat Chrissy Edwards.”

Why did I listen to Chris?

Well, he was on in the evenings, when I wasn’t in high school.

And I preferred WHEW to their larger competitor, WIRK.

Like most listeners, I tuned in for the music. But in the evenings, I chose WHEW because I didn’t simply hear the music I liked, with the records spun by some DJ.

I chose WHEW because while WIRK had some guy playing the records, WHEW had the tiny world that Chris Edwards had created for us…in which he played the records.

One evening I drove to the radio station on Military Trail — i.e., in the middle of nowhere.

I don’t recall why.

It wasn’t to pick up a prize, because WHEW’s management was smart enough to mail the worthless promo records that were awarded to their contest winners.

Probably after I’d won so many of WHEW’s contests that they had to change the rules to give other people a chance, too, Chris said to me, “Hey, if you ever want to come down to the radio station and see what we do here, be my guest.”

Real radio people will know what I mean when say this was a real radio station.

At night, it was inhabited only by the young evening jock, made pudgy from the combination of his remaining baby fat and his catch-as-catch-can junk food diet, and the callers on the request line…which never stopped blinking.

It was as though those pulsating request line lights were powering the entire radio station.

They were supplying the station and the DJ with the essential ingredient:

Listeners. Mostly teenagers for whom WHEW wasn’t the most important thing in life.

Not the most important, but vital nonetheless.

That warm, exciting mini-world offered safe refuge from so many agonizing days of grappling with the self-doubt that afflicts us all but which hits teenagers the hardest…because they haven’t yet realized it’s not only they who feel so terribly, so constantly insecure and inadequate.

My First Visit to a Radio Station Was Not Magical.

That was my first visit to a radio station, and it didn’t feel magical.

I wasn’t dazzled by the tape decks and turntables and tick-tick-tick of the clock above the console, which never seemed to win the battle of wits with Chris as he effortlessly back-timed into the news or ad-libbed over the song intro until his last syllable brushed right up against the first wisp of the vocal.

I didn’t think, “This looks so confusing. How do you ever learn to do all those things simultaneously?”

What I thought was, “This is cool. He actually gets paid to play the music that fills my life…and to talk to and entertain thousands of strangers each night.”

His collection of strangers, to whom he spoke on-the-air and on the phone.

Remember, those long ago times when pay phones proliferated coincided with the days when disc jockeys didn’t consider themselves too important to pick up a ringing phone and field a request, a dedication, a complaint…and occasionally even a compliment.

Other than referring to himself as Big Fat Chrissy Edwards, my only specific memory of his show is from the night he announced he no longer would play a particular song, because it offended him.

The song was Ernie K-Doe’s “Mother-in-Law,” which by then was an oldie from several years earlier.

One evening Chris played that song and at the end he said, “Y’know, that’s the last time I’ll ever play that song, because my mother-in-law is a wonderful person, and she doesn’t deserve to be insulted like that.”

Why did that make such a strong impression on me?

Not because Chris apparently was taking a bold, ethical stand.

Not because of his gallantry or his touching fondness for his mother-in-law.

I was impressed because that declaration came from him…and only from him.

I knew there wasn’t another DJ anywhere saying, “That song is wrong and unfair, so I won’t play it any more.”

Of course, once I became “a radio guy” I became aware of an alternate explanation for Chris’s bold announcement:

Maybe WHEW’s music director had decided to remove that song from the station’s on-air oldies selections.

If I knew that were the case, I’d have been even more impressed. That’s what real radio DJs do: They make the most of whatever meager tools they’re given (or can find or “borrow”).

Chris moved on to WFUN/Fort Lauderdale-Miami and then — with several of his ’FUN compadres — to KYA/San Francisco.

When some years later I landed in San Francisco as a jock, I called Chris at KYA.

By then, he’d crossed over to The Dark Side — Sales.

It began as one of those typical “I’m sure you don’t remember me, but…” calls.

Upon hearing my name, Chris said, “Oh, yeah. You were the kid who won all the contests, right?”

It was during this conversation that I learned I’d been listening to him at his first professional on-air job.

That was the last contact we ever had with each other.

Everyone I’ve met who worked with Chris says the same thing: “A real nice guy.”

I Belatedly Learned that Chris Passed Away January 31 of this Year.

We may never see “Chris Edwards” in the Radio Hall of Fame.

But he’s in mine.

Previous post: WAS THIS RADIO COMMERCIAL CREATED FOR 99 CENTS ONLY?