How Not to Pre-Test a Radio Commercial

Rishika Vazirani asked this question about radio commercials on my Facebook page:

“Was wondering if you know any agency who ‘pre-tests’ radio creatives?”

Off-hand, no. But I’ll be glad to give you my opinion on the way some people misapply “scientific measurement” to pre-test radio campaigns.

Seven years ago I was contacted by a smart, successful radio owner who is well-known as a pioneering maverick. (Let’s call him Pioneer.)

His tactic: Have an “expert” train 3 people to apply the Facial Action Coding System (FACS) to review potential commercials and, applying what the guy taught them, determine whether a spot is “engaging.”

The Theory: The more “engaged” listeners are, the more likely they are to buy the product or service being advertised.

I originally understood the proposal to be to test the commercials on volunteer listeners and use FACS to measure subjects’ autonomic facial reactions to determine their level of “engagement” with the commercials.

Instead, those 3 newly minted mini-experts simply review commercials and assign them FACS ratings.

The Expert, I was told, was not claiming to be an authority on creating successful radio commercials. He had a Ph.D. in something or other. As far as I know he’d never created a successful radio spot (or even an unsuccessful one).

Still, he had developed a list of principles for creating “engaging” ads.

“If the commercial consists of a dialogue, engagement tends to increase.”

In reality, it all depends upon the situation, the type of dialogue, and the copywriter’s ability to create compelling, relevant dialogue.

The Expert undoubtedly was referring specifically to “dialogue spots” — two people, inside the commercial, talking to each other.

That’s one type of dialogue spot, but it’s not the only kind. The Expert didn’t understand that.

A second kind of dialogue spot is one person talking directly to the listener. Not shouting or proclaiming; talking. Done well, the listener’s internal response constitutes the other end of the dialogue.

And there’s a third type of dialogue commercial: The monologue spot that is an inner monologue, spoken aloud. The listener hears a representation of what the character is thinking and mentally or emotionally responds to it.

But there are some limitations to that model:

1.  For most people, writing dialogue that is believable, relatable and compelling is difficult. Even for professional dramatists.

In the world of theater, if you say “someone who writes great dialogue,” the unanimous, reflexive response is, “David Mamet.”

Because writing dialogue requires both talent and a high level of craft, that type of “dialogue spot” shouldn’t be thought of as the “default mode” when writing a commercial.

2.   The purpose of the two-person dialogue spot is for the listener to be influenced by a conversation that is relevant to the listener’s situation.

The more relevant and compelling the message, the less distance you want between the commercial and the listener.

Example: You’ve just been diagnosed with leukemia. Which would you rather hear: Two people talking about how to treat leukemia — or one person telling you how to treat your leukemia?

I teach writers that a good commercial is one that enters a conversation the prospect already is having. (Thank you, Robert Collier, for having promulgated that concept.)

Entering that conversation is much more powerful than attempting to begin a new conversation.

3.  The best commercial copywriters have their own preferred ways of entering into a conversation with the listener. They don’t make a conscious choice; they simply write according to their strengths.

April Winchell — one of the most talented radio copywriters around — frequently employs a distinctively different style: one person — a believable “character” with exaggerated characteristics — delivering the sales message with brilliantly funny dialogue.

Dick Terhune specializes in one-person spots, with each “person” tailored to the needs of the campaign.

Some great copywriters are accomplished musicians, and they are much more likely than others to include customized music, lyrics, etc.

I’m a “word” guy, and as a writer I learn toward  gentle sarcasm.

Probably half of what I write is one person speaking to the listener, while the other half is a two-person dialogue. But it’s never the “Say, Jane, where did you get those beautiful fingernails?” kind of dialogue that fills most commercials.

I was asked to provide 5 radio commercials that I thought would test well; these would be forward to The Expert to “test.”

I sent them 5 spots I guessed would test well. I didn’t, however, indicate how successful any of the commercials were.

Instead of “testing” the commercials, The Expert critiqued them from a creative standpoint.

He thought the punchline to one of them was funny. But I guarantee he couldn’t have explained why it’s so funny in the context of that commercial and why it’s so effective.

Being funny isn’t enough. The laugh line needs to reinforce (or carry) the sales message.

He gave the 4th spot a failing grade because he “didn’t understand and couldn’t relate to” it. The campaign worked like gangbusters with the target audience: teenage girls. But he’s not in the demographic, and he doesn’t understand the very sophisticated method (“Pacing & Leading”) that was used to tell that story.

And the 5th commercial? Well, let’s come back to that one later.

I told my Pioneer friend, “None of his critiques considered the goals of the campaigns or the audiences to whom they were addressed. If the target audience for each commercial isn’t factored into the analysis, you’re going to end up with some seriously flawed data. If he’s going to go around giving people ‘creative’ advice, critiquing what’s good and what’s not good about a commercial, that’s a serious problem — because he’s not qualified.”

What Is an “Expert”?

Several years ago one of the largest ad agencies to specialize in Direct Response radio advertising hired me to coach their copywriting staff.

The first time, when I checked into my hotel I was handed a large manilla envelope.

The envelope contained 5 pairs of radio commercial copy, for a total of 10 scripts.

It was accompanied by a note from the President of the company:

“Dan…Please review these five radio campaigns, and for each one tell us which you think performed better.”

As a direct response agency that carefully tracks results, they knew exactly how well each had performed. They had tested them against each other in the only arena that matters: on the radio.

Great. The real message to me was, “You’re an expert at this stuff? Prove it.”

Just what I needed. If my predictions flopped, my credibility would be shot.

I read the 5 pairs of scripts and indicated which one in each was likelier to have performed better.

The next morning, we all sat around a big conference table as the company president went through my selections.

“Pretty impressive, Dan. You got 4 out of 5 right. The only one you got wrong was for (CLIENT).”

I enjoyed the “pretty impressive” compliment for 3 or 4 seconds before becoming defensive: “What? You’re telling me that this one performed better than the other?”

Inconceivable. That script was a mess; I could barely follow it.

“Do you happen to have a copy of the actual commercial? I’d like to hear it.”

He did have a copy of the commercial that had aired on the radio. He played it for the rest of us, and after 5 seconds I said, “That guy’s a platform speaker, isn’t he?”

A platform speaker is someone who speaks from the stage, to a live audience, with the sole purpose of selling something.

Immediately I could tell 3 things from those 5 seconds.

1. The guy on the recording was Australian.

2.  He was an experienced platform speaker.

He could’ve sold anything to anybody.

From reading the script, I had no way of imagining how those words would sound coming out of that guy’s mouth.

That’s why to this day when I’m asked to “predict” the winning commercial script, I’m careful to ask, “Who will be delivering the copy?”

Still, with no warning and no preparation, 4 out of 5 wasn’t bad.

Which leads to the ultimate definition of “an expert.” 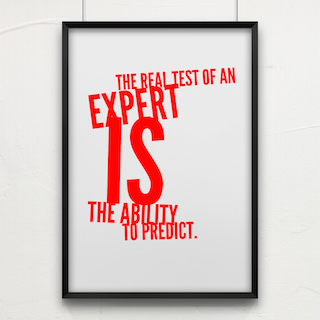 An expert is someone who can predict the results.

You know how after there’s a big swing in the stock market — prices dramatically rise or fall — all these “experts” appear on radio and TV to explain why it happened?

That’s not expertise. It’s not particularly difficult to predict what will happen after it happens.

The expert is the one who predicted the stock market swing before it occurred…and explained why it would occur.

I could’ve sent “The Expert” a radio campaign I recently had produced that tripled the client’s online sales in a single week. He would’ve reported the spot was boring and confusing.

1.  He’s not the kind of person my clients were trying to reach.

Remember how I’d sent the Pioneer five radio commercials that I thought were good?

Here’s The Expert’s response to the 5th ad, verbatim: “There is nothing at all funny about that commercial.” He gave it a failing grade.

You can’t objectively state “there’s nothing funny about that.” Humor is 100% subjective.

He can say, “I don’t find anything funny about that” without fear of contradiction.

The commercial was a parody. Probably he wasn’t familiar with the genre being parodied, so to him it wasn’t funny.

My question to you is not “Is it funny?”

Remember, “funny” is 100% subjective. I wouldn’t expect everyone to find this amusing.

My question is, “Is it funny to you?”

How to Pre-Test a Radio Commercial

Play it for a number of people in the target demographic — individually — who know nothing about the ad campaign.

1. What’s the one message you get from that spot?

2. What’s the one action the advertiser wants you to take?

Those 2 questions measure the clarity of the message the commercial delivered.

3.  How has it affected the likelihood of your taking that action?

The third question measures the spot’s relevance and persuasiveness.

Next post: Is “Best” Better Than “Competitive” in a Radio Commercial?

Previous post: The Radio Advertising Client Who Doesn’t Believe You