HOW TO FIX THAT RADIO ADVERTISING “STORY” COMMERCIAL

In response to my critique of this Cedars-Sinai hospital radio commercial, Richard Navarro wrote:

“So Dan… forgetting that this was an actor playing a role… what would have made this spot better, a re-organization of lines in the script? Your insight please.”

Well, to start, the problem with that radio commercial wasn’t the performance.

That could’ve been a real person telling his own real story…albeit following a script that had been crafted from bits of dialogue he’d previously delivered during a recorded interview.

I do think it’s an actor, however, because although he achieves an appropriately low-affect delivery (rather than trying to dramatize events that in themselves are dramatic), he’s a little too smooth to be “a real person.”

In this case, the glaring structural error was unveiling a plot point so compelling that it eclipsed whatever message followed it.

The story should lead directly to the spot’s “sales message.” You shouldn’t be able to think of the story without also thinking of exactly what it is the sponsor wanted you to do…and, for that matter, who the sponsor is.

Even as you read these words, you might well be uncertain who the advertiser was. You know it was a hospital…but which hospital?

As for the Call to Action, they foolishly gave two: Go to our website or call us on the phone. 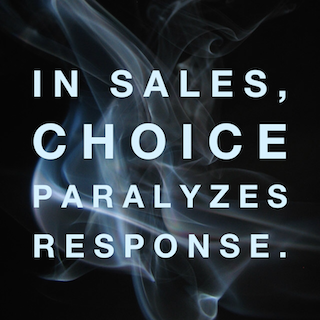 Two Calls to Action is one too many.

It’s enough of a task to motivate targeted listeners to decide to do what you want them to do.

With two Calls to Action, you’re making them decide twice:

Second, to choose which action to take.

With each additional choice, your overall response rate drops.

Returning to your original question: “What would have made this spot better?”

Previous post: The Danger of the Wrong Story in a Radio Commercial