SAYING “DOLLARS” IN A RADIO COMMERCIAL 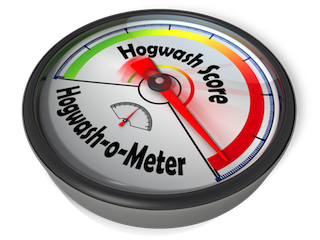 First, let’s listen to part of a radio commercial that recently aired in Los Angeles.

Generations of radio copywriters have been told never to say “dollars” when referring to the price of an advertised item.

The rationale behind that dictum is, “You don’t want people to think about having to spend money” to acquire whatever is being sold.

Apparently you’re supposed to hope the listener will assume the furniture sells for 300 pesos, not dollars.

In real life, there are occasions when real people typically don’t say “dollars.”

“How much is that package of baloney?”

In a supermarket ad that boasts, “Hormel Pigs Feet, just two eighty-eight” — you don’t say “two dollars and 88 cents” because that’s not what real people say.

If you don’t believe me, just ask a pigs feet consumer.

On the other hand, if someone asks you how much you pay for your new cloud-based computer backup service and you reply, “Oh, it’s only 5 a month,” the other person will react with a quizzical look.

When you say the advertised furniture sells “for 300,” you force the listener say “dollars” sub-vocally. (Sub-vocally is a very impressive way of saying, “To themselves, silently.”)

Because no one says “the furniture costs three hundred,” the psychological principle of closure takes over.

Closure is the natural tendency of the human mind to impose order upon chaos.

When your brain hears “the furniture costs three hundred,” it wonders, “300 what???”

The best reason for avoiding “dollars” in a commercial is in a situation where people would be unlikely to say it in real life.

“Hey, you go that car wash down the block, right? What do they charge for a basic wash & wax, with none of their overpriced extras included?”

In that situation, you’d be unlikely to say, “Umm…Nine dollars and ninety-five cents.”

On occasion, you can minimize the financial cost by employing slang when appropriate:

“We’ll drive to your house; install your state-of-the-art entertainment system; install this amazing home security system that lets you see everything that’s happening anywhere in your house from anywhere in the world, simply by glancing at your new iWatch, which we’re also going to give you; and replace that unsightly firetrap that sits atop your home with a brand new slate roof…

In that case, “3 grand” probably would be fine.

So would “three thousand dollars.”

But “all for less than three thousand” would force listeners to fill in the blank for themselves: “Huh? Oh, three thousand dollars. Why didn’t they just say that??”

Let’s return to this radio commercial.

Clearly the copywriter has been trained to “minimize” the apparent price by never, ever saying “dollars.”

But in this spot, they’re talking about how much money the listener will save.

Don’t you think they’d want to emphasize the actual dollar amount that listeners can save during their sale?

Speak to your listeners in the language they use and understand.

In fact, this is so valuable that I’m going to call this:

My One Million Copywriting Tip