Yesterday Terry Moss teased “one of the greatest secrets” of show prep, revealed to him by “an old Italian morning man.”

I believe it was this moment that caused me to adopt a habit that people who know me instantly will recognize.

Hint: Something that’s always in my shirt pocket. 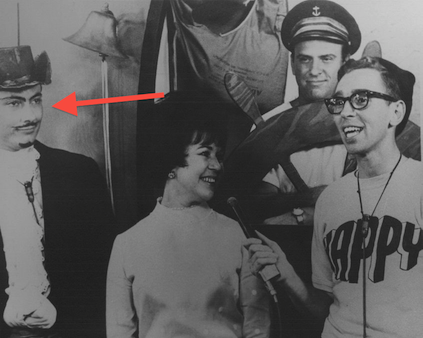 Although popular with TV viewers, radio listeners, and his fellow servicemen, Terry was considerably less popular with “the brass.”

Gerald M. Fry recalls this incident — which I never heard about from Terry — from the Panama Canal Zone during the Vietnam War:

I was Terry’s commanding officer in Armed Forces Radio & Television. I should have kept the infamous anti-war morning show that Terry pre-taped in 1969. I turned on SCN Radio that morning as I always did while preparing to go to work and couldn’t believe what I was hearing — wall-to-wall anti-war songs of the day (this was the day of the big peacenik march on Washington, D.C.) with no Terry in between.

I called him to see what was going on and he confessed that he not only planned this personal anti-war statement, but knowing that he might be caught in the act, he had pre-taped the entire two-hour show.

I ordered him to dump the tape, go to a PSA, then resume a normal, live wake-up show with time hacks and community announcements and no more anti-war music. I also told him that I would try to save his rear end from a court martial should anyone above me have heard what was on the air.

Of course they were listening, and I was called on the carpet to explain how such a thing could happen. I successfully saved him from an Article 15 court martial, but I was ordered to pull him off the air permanently. My argument that we had no one presently on staff that good fell on deaf ears and I had to relegate Terry to strictly production duties where his pre-recorded stuff could be auditioned before it aired.

Naturally, everything he turned out of the production booth was highly creative, original, full of life, and mostly funny. Working with our limited production library, he found the elements he needed from our music library and turned out first-class work.

Terry was very apologetic for embarrassing me by his actions that day, but he felt strongly about the Vietnam war and had to express himself in the most creative way at his disposal. I was more upset with him for letting the cat out of the bag that we had all those songs in our library — my instructions had been to play them very selectively at times when command brass would be unlikely to hear them.

Tomorrow: A very different, legendary encounter between Terry Moss and a branch of the U.S government.