Here’s where most radio promotions come from.

PROGRAM DIRECTOR: Anybody got a good idea?

STAFF MEMBER: Why don’t we do that thing we did last year?

STAFF MEMBER #2: What about that thing (Another Station) did in (Another Market)?

PROGRAM DIRECTOR: What about you, (Promotion Director)?

PROMOTION DIRECTOR: Do I still have no budget?

PROMOTION DIRECTOR: What about that thing we did last year?

But if you keep your eyes and ears open, you needn’t run out of fresh, original, fun, audience-engaging promotional ideas.

I’m sure I could introduce this as pithily as Jonathan Corbett, but that would take me far longer to write than simply quoting him:

“Recently, the folks at Buzzfeed asked the blokes in their British offices to put down their tea, turn down the Beatles and stop obsessing about the Royal Family for long enough to fill in a map of the United States based purely on stereotypes.

“They obliged, which isn’t surprising, considering that the assignment sounds a whole lot more interesting than writing another article about a potential Spice Girls reunion or how they’ll manage to not win the World Cup this time around.”

Warning: If you’re likely to be offended by crude language or someone making fun of your religion, political beliefs and/or beloved geographical affiliation, please don’t look at this map.

Seriously. We don’t need another religious-political-geographical war here. The important thing, for the purposes of Us Creative Radio Folk, is that we can springboard from this silly map to a fun, free promotion that you can fit perfectly to your audience and market. 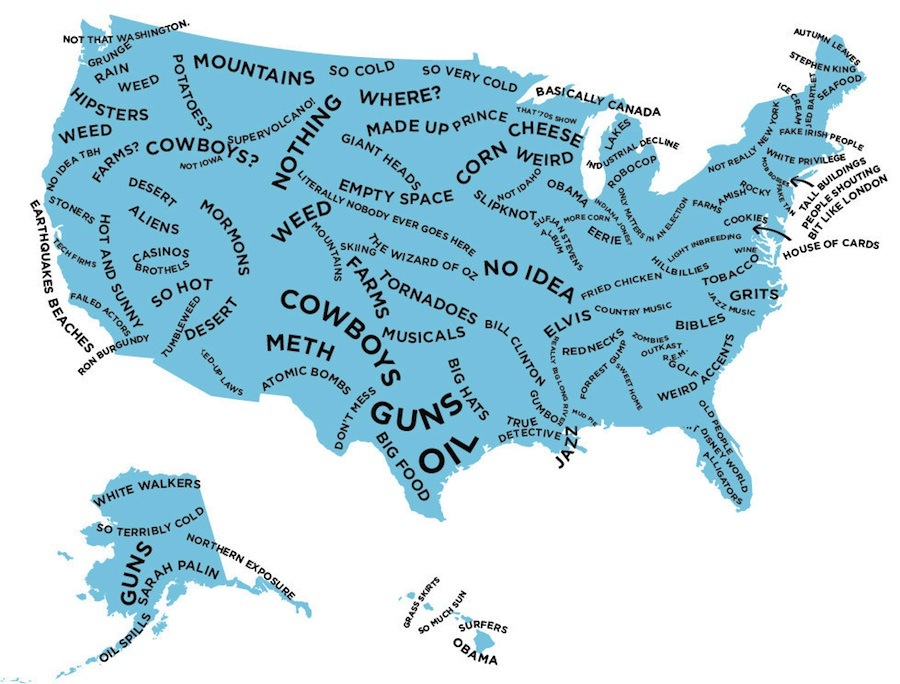 So, there’s the inspiration.Probably you were amused or you were offended. Maybe both.

All of these can be done on your Facebook page. Or on your blog. Or anywhere else you choose.

You can have people vote on their favorite submissions.

You can have a Distinguished Panel of Judges decide which entries make it to the Radio X unOfficial Map of (          ).

You’ll also end up with something highly visual, which your local TV newscast may shock you by talking about on-air, assuming you create a map that:

* Either has no bad language or that has the naughty words covered up.

At this point, one reader wants to say, “The TV station in our market never mentions us.” True, but that’s because until now you’ve never given them something that they felt could add to their program’s entertainment…uh, “news” value.

Linear Examples of How Your Radio Station Can Adapt This

Have your American audience make a “stereotype” map of Canada.

Have your Canadian audience make a “stereotype” map of the U.S.

Have your non-European audience make a “stereotype” map of Europe.

Have your European audience make a “stereotype” map of Europe.

More Creative Examples of How Your Radio Station Can Adapt This

Have your audience (wherever they are) make a map of the U.S. based solely on what they see on television. To tell them to disregard everything they might know from other sources; their only references can be TV shows.

They might have images of Calabasas (or, more broadly, “the Valley” in Los Angeles) based on the antics of those wacky Kardashians or, perhaps, of the considerably more admirable Ray Donovan.

Impressions of Albuquerque (or, more broadly, New Mexico) might be drawn from Breaking Bad.

Their impression of New York City might be influenced by Sex in the City or, perhaps, by Law & Order.

How Your Snooty Public Radio Station Can Adapt This

Have your audience (wherever they are) make a map of the U.S. based solely on references from literary fiction.

How Your Sports/Talk Station Can Adapt This

Have your listeners make a map of the U.S., based on common stereotypes of the various local teams’ fans and/or players.

Have your listeners make a map of the U.S., based on the sports they play in each region, special rules, etc. (Example: New England’s the only I place I know where people engage in Duckpin Bowling.)

How Your Political Talk Station Can Adapt This

Have your listeners make a map of the U.S., based on common stereotypes of the political leanings and foibles of the various geographic areas.

There’s no limit to where you can take this.

Make a map based on the local denizens’ musical preferences.

Make a map based on what rock stars came from where.

Make a map highlighting stereotypes of the kinds of cars people there drive.

When I work with radio stations or morning shows, often I’ll teach them how to create what I call their Unique Listening Proposition. It’s not terribly difficult.

The radio consultant or programmer who puffed out his chest and declared, “There are no new ideas under the sun” really was saying, “I don’t know how to have a new idea.”