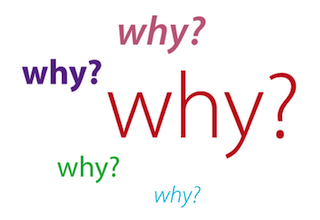 My favorite retail billboard appeared above a store on Wilshire Boulevard in Los Angeles:

Translation: “We’re having a big sale so we can make more money!”

Talk about honesty in advertising.

In a classic psychological study, college students tried to “cut the line” to use a photocopy machine — asking the person at the head of the line if they could go first.

When all they said was, “Excuse me, may I use the Xerox machine?” 60% of the time the other person said yes — probably due to social pressure, lack of assertiveness, or just plain niceness.

But when the person said, “Excuse me, may I use the Xerox machine, because I’m late for class?” 94% of the time the other person said yes.

You’re not surprised by that?

Then how about this:

When the person trying to cut the line said, “Excuse me, may I use the Xerox machine, because I have to make some copies?” — what percentage do you suppose was successful?

So what do you suppose the success rate was when a dumb reason was given?

In other words, giving the reason of “because I’m late for class” was only barely more successful than “because I have to make some copies.”

I learned the power of “giving a reason” when I was 15. I accompanied my father on a one-day trip to some business conference.

The conference was held at a big hotel. One of my father’s co-workers also attended, and he brought along his daughter — who attended my school and was a year older than I.

She was pretty and vivacious, and back in school we never even would have thought to talk to each other, because she was a year older!

She was out of my league.

But here we were together, in another city, in a big hotel, without adult supervision while our fathers were at the conference. You can just imagine what happened:

Yep, we rode up and down the elevators, pushing all the buttons and laughing hysterically.

I am not proud of this story.

At one point we got to the Lobby Level and the elevator door opened. We were the only two people in the elevator, and several people were waiting to enter.

That’s When I Experienced One of the Most Extraordinary Encounters of My Life.

The person in front of the group of people waiting to enter started to step inside.

And as I reached for the “Door Close” button I said, “Sorry, this elevator’s all empty!”

The person nodded and stepped back…and the door closed.

I would like to be able to tell you I was conducting a serious linguistic experiment, but the truth is I was being obnoxious and although I meant to say the elevator was full, what I actually said was that it was empty.

An elevator being empty is a nonsensical reason for someone not entering it.

But that lesson stuck with me all these years: Even a lame reason is better than no reason at all.

Obviously, in advertising a strong reason is preferred.

But without the benefit of an existing strong reason, it is possible for a good radio copywriter to create one.

Seafood Restaurant — “Our Chef Is So Crabby”

Normally our chef is so cheerful. But recently he added to the menu his own special crab cakes. He’s so proud of them. Everyone who works at the restaurant agrees they’re best-tasting crab cakes in The History of the World.

But few diners are ordering the new crab cakes. They always order lobster, which is understandable. After all, we’re famous for our lobster.

But the next time you visit us and you order the lobster, won’t you please consider also ordering at least the appetizer portion of our Chef’s crab cakes?

Next post: ANOTHER RADIO COMMERCIAL EXAMPLE OF “REASON WHY” STORYTELLING