THIS ONE’S JUST FOR RADIO JOCKS

Yesterday we heard from a radio personality who was frustrated at the lack of courtesy he believes emanates from too many program directors. 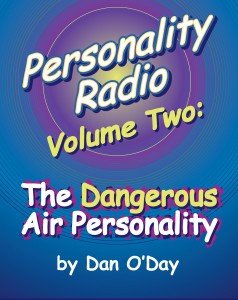 PERSONALITY RADIO, VOLUME TWO: The Dangerous Air Personality includes a recounting of an incident that occurred at the beginning of Jay Meyers’ career.

“In 1975 I was novice jock, looking for work. I called up this program director at a small station in Chester, Pennsylvania. He said, ‘Yeah, I have a weekend opening. Meet me at the station at 10:00 on Saturday morning.’

“Years passed. I ended up as Program Director at WFIL/Philadelphia in 1983.  My second day on the job I got this 12-page resume and letter: ‘I’m this long-time Philadelphia air personality, I hear you may be going oldies, and I want to be involved in it, I’d be great for you, etc.’

“I read through the resume, and when I came to the part where it said, ‘1975:  Program Director, WEEX/Chester,’ it suddenly clicked in. It was the very same guy!

“I wrote him a letter that said, ‘In 1975, when you were program director at WEEX and I was just a beginning jock, you had me drive out to your station to meet you, but when I got there you wouldn’t give me the time of day.

“And I put it in an envelope with his résumé and mailed the entire package back to him!

“So sometimes it’s true:  What goes around comes around.”

Next post: HOW PUBLIC RADIO & COMMERCIAL RADIO PEOPLE VIEW EACH OTHER

Previous post: IS “COMMON COURTESY” IN RADIO AN UNCOMMON EVENT?