Yes, There Is Still Originality On Radio

I originally shared this in the early days of this radio blog. If you weren’t a loyal reader then, probably you never saw it.

Rune Dahl of Radio Norge made me aware of this radio phone bit (I hate the term “prank call”) by Bård and Vegard Ylvisaaker, aka the Ylvis Brothers. 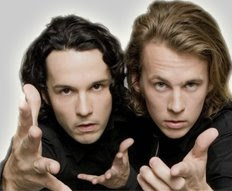 A phone bit? What could anyone possibly do that’s new?

The set-up is the guy is too nervous to talk on the telephone, so he sings instead. Give it a listen:

I asked Bård how they came up with this concept….

This was actually made on the last day on air {at NRK — Dan} for us. We needed something that could make us leave the air with a blast, and we were really quite desperate.

We’d been thinking about making a phone call as an improvised musical for a long time, but actually found the idea a bit cheesy — or cheap. But since we had no other idea, we tried it — and it turned out to work better than we imagined.

My brother, Vegard, played the piano in studio, while I was singing. We didn’t rehearse anything, just gave each other some signs to hint what moods we wanted for the separate parts.

Every now and then I hear something that’s both creative and new, and it gives me hope.