RADIO COMMERCIAL SUCCESS: Behind The Scenes With Dick Orkin

In honor of Halloween, instead of our usual Monday Radio Commercial Smackdown I’ve decided to share one of the spots features in Secret Case Histories From The Radio Ranch.

Radio legend Dick Orkin pulled back the curtain to reveal behind-the-scenes stories of a number of The Radio Ranch’s many successes — some well-known, others less so. 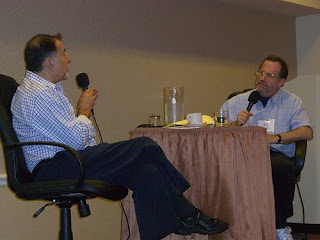 (That’s Dick on the left, with me on the right, pretending to be interested.)

One great success was for Carlsberg Beer, but only after they figured out how to solve a problem: The ad agency insisted they use the line, “Don’t touch my Carlsberg!”

As Dick explained, it wasn’t easy to find a way to use that line in a manner that didn’t sound overly aggressive. But they managed to overcome that obstacle, as you’ll hear in this spot (featuring Tom Poston along with Dick).

When doing a comedy spot, it’s important to build to a payoff at the end. Notice how this one does just that.

Although this campaign aired in Ireland, the agency specifically wanted to use American voices. Perhaps they figured “American” and “aggressive” go together nicely.

Next post: HOW TO BUILD YOUR CAREER AS A RADIO PERSONALITY, Part Five