After an uneventful taxi ride to Peoria Airport, I entered the ticket area to discover a very long line of people in front of the United Airlines counter. Peoria is a small airport, and the last thing I expected to find was a long line of travelers.

While standing in line, I heard someone mention “cancelled flight.” I went up to check the board and, sure enough, my flight to Chicago had been cancelled…with the next flight scheduled more than three hours later.

This meant, I assumed, that everyone who was supposed to be on my flight would be bumped to the later flight…if there were enough seats available. Because my flight from Chicago to Peoria the day before had been crowded, it seemed likely that some of us would not make that one, either. 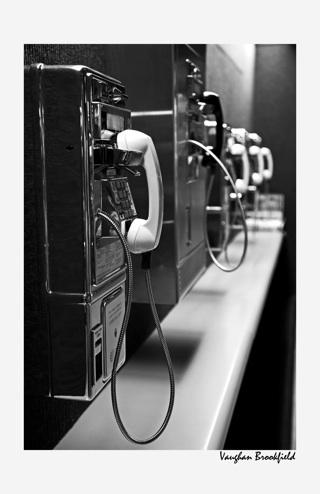 You'd Put Coins Inside These And Then Talk. Really.

So I did what we road warriors have learned to do in situations like this: I left the long line of customers and headed for a *pay phone, from which I called United Airlines.

Sure enough, they were able to get me on the later flight…even snagging the exact seat I wanted. (If you ever find yourself flying on an ATP — a small prop-jet — I recommend seat 1B. It’s the only seat on the plane with any leg room.)

The following week featured the kind of productive schedule I especially like: On Tuesday morning, I presented How To Critique Radio Talent for Patterson Broadcasting’s Managers Meeting here in Los Angeles.

Then it was off to the airport for a flight to Seattle, where on Wednesday I presented The Total Quality Service Radio Station for the Washington State Broadcasters Association’s annual convention. This was my first opportunity to work with Mark Allen, and I’m happy to say I was invited to return to that venue in 1998, too, to present a different broadcast management seminar.

Then on Wednesday I presented How To Create Maximum Impact Radio Advertising for American Radio Systems. This was my second time working with Fred Schumacher; I had spent a couple of days with the programming and sales staffs of KMPS several years earlier.

Next Installment: A would-be comedian flight attendant…and the gorgeous woman who insisted on sitting next to me during a 10-hour flight to Europe.

Next post: (video) ONE OF THE GREATEST PUBLIC SERVICE ANNOUNCEMENT SPOTS EVER