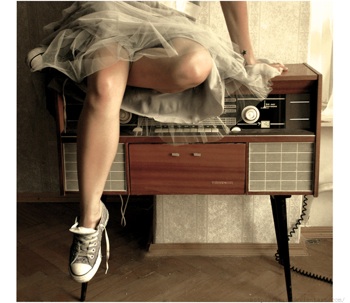 A Woman On The Radio

Here’s how one guy justified it in an online posting:

“Radio stations, research and focus groups have done many studies on this subject and the result is the same and has been the same for years. The result has been that most women don’t like to listen to other women on the air.

Let Me Explain This Yet Again.

It is very unlikely that the anonymous person quoted above has ever seen any such “research.” More likely, he is parroting what he has been told by others…who in turn are repeating what they were told.

If that person did see the “research,” then he simply is incapable of separating Research from Garbage.

Before we examine the quality of said “research,” let’s dismiss his last statement as patently ludicrous:

“Stations that put women jocks back to back suffered because of listener complaints (mostly by women) that they didn’t want to hear women back to back.”

Oh, I see. Most radio stations have large numbers of listeners who spend eight solid hours with one radio station. And they complain when they hear two female hosts. Sure they do.

Most female personalities have been told by one or more PDs or managers, “You can’t do (     ) on the radio, because you’re a woman.”

You can’t talk about politics on the radio, because you’re a woman.

You can’t be sarcastic on the radio, because you’re a woman.

You can’t talk about sports on the radio, because you’re a woman.

You can’t be funny on the radio, because you’re a woman.

And how does the PD or GM know this?

Oh, really? May I see that research?

“Oh, no, it’s Top Secret. Nobody can see that research. But believe me, it exists.”

To Our Male Readers: Think about being unemployed. Think about all the non-returned phone calls and ignored airchecks and resumes and the frustrations of looking for work.

Female jocks put up with all the above, too, plus they’re told:

“Sorry, we already have a woman on our air staff.”

(How many readers have ever been told, “Sorry, we already have a man”?)

“We tried a woman once, and it didn’t work out.”

Radio in North America is dominated by white males with limited educations and a very narrow view of the world. (Yes, at this moment a white male PD with a Ph.D in International Studies is firing off an angry e-mail retort. But I’m talking about the majority.)

I offer “limited educations” not as an insult but as a fact. If you’re a PD, I wonder how much time you’ve found during the past few years to read books on sociology, psychology, history or philosophy. (Sorry, reading “the trades” doesn’t count.)

But what about this legendary “research”?

This comes from gathering a focus group of radio listeners and asking some variation of:

“Which would you rather listen to:

1. A morning show with a male host and a female sidekick

2. A morning show with a female host and a male sidekick

The focus group participants search their memory databases for instances of strong female hosts…and they come up blank. They did not grow up listening to a funny, entertaining, outrageous, provocative woman jock because from the beginning of radio until today precious few women have been given the chance to develop as strong personalities.

Instead, to those focus group members, “female disc jockey” means Morning Sidechick (who giggles at the funny stuff “the boys” do) or Mid-Day Jock (“Another 17 in a row….”).

If I ask you, “Do you think you’d enjoy tuna fish-flavored ice cream?” you will search your own experiences, looking for a point of reference. But you’ve never tasted anything at all like tuna-flavored ice cream. So even if you like both tuna and ice cream, there’s a good chance you’ll vote “thumbs down” on this proposed marriage between Starkist and Ben & Jerry’s.

What does this illustrate?

People Cannot Accurately Predict Their Reactions To Stimuli That Are Outside Their Frames Of Reference.

Those focus group members literally cannot imagine what a brash/ funny/provocative/outrageous/opinionated female “DJ” would sound like. So when you ask if they’d be likely to listen to one, they reply, “Uh….No, I don’t think so.”

In 1989, few boxing fans thought Mike Tyson could be beaten in the ring. In 1990, many fans were sure he could be beaten. What made the difference? A guy named Buster Douglas, who convincingly knocked out Tyson in Tokyo.

Before Douglas came along, no one had ever seen Tyson lose. So they couldn’t imagine it. But once the image of a more mortal Mike Tyson entered the collective consciousness, people’s perceptions of “reality” changed.

FACT: Radio listeners will listen to people who entertain or otherwise engage them. Regardless of their gender, age, or race.

FACT: Darn few audience members listen to one station for two complete, consecutive air shifts. And those few exceptions do not call radio stations to complain when they hear two women in a row.

FACT: Radio is a tough enough business to survive in without having to put up with such ignorant bigotry. And that’s what it is: bigotry. The mindless embracing and spreading of unfounded, false generalizations about specific groups of people.

But right now someone is reading this and thinking, “Oh, he’s being so Politically Correct.”

So forget about fairness. Instead, concentrate on this fact:

And when you commit to such bad radio because of “research,” you are making programming decisions that are based upon incompetent research.

Here’s a jock whose airchecks I’ve played in radio seminars around the world. Oddly, every time I play her stuff, many (not necessarily all) of the attendees love it. Even though the jock is — gasp — a woman!

Her name is Slim.

Here is what she sounded like back in the ’80s…