ELLIE GREENWICH: Thank You For The Great Songs and for Not Suing Me 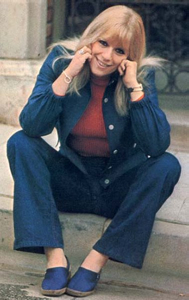 I’m not going to write a tribute to Ellie Greenwich, because I don’t know enough about her or her body of work to do justice to either.

I do, however, know more about her music than the idiot pop critic for my local newspaper, who implies that “Leader of the Pack” is a great song (it was a big hit but virtually a novelty record due to its way over the top production & performance) while dismissing “And Then He Kissed Me” as “light as a cotton.”

Ask a woman who was 13 to 16 years old when “And Then He Kissed Me” was a hit how important that song was to her.

And what song did that pop critic dummy omit entirely in her recounting of Greenwich’s career highlights? Only the one that truly is iconic of ’60s pop: “Da Doo Ron Ron.”

The Simpsons’ Matt Groening is right: There is no lower form of intelligence than a pop music critic.

But that’s not what I want to talk about.

I’m here today to publicly thank Ellie Greenwich for not suing me.

In 2002, the Enron scandal broke. As I read about all those people whose lives were ruined by greedy, thieving bastards who would do anything to obtain and keep their private jets and multiple mansions, I became infuriated. Livid. Filled with rage.

When you’re a writer, being filled with rage often is not a bad thing. Me, I had to say something. Even if I didn’t have an audience.

The idea popped into my head, I wrote it on a scrap of paper on Saturday, produced it on Sunday, and made it available to my Radio Programming Letter subscribers and website visitors on Monday.

I used “Da Doo Ron Ron” as the framework. Note that I didn’t say “parody,” because it’s not a parody. Making and distributing the recording violated copyright law — no question.

Huh? Don’t radio people do that all the time?

Yeah, and most of the time they’re violating someone’s copyright.

Here’s the short version: To qualify as a parody under the “Fair Use” doctrine, the new work must directly comment on either the original work or on the artist(s) who created the original work.

My little protest didn’t comment on “Da Doo Ron Ron,” The Crystals, or the songwriting team of Barry & Greenwich. (Phil Spector, slimy even then, produced the record and demanded a songwriting credit, so he’s officially listed as a co-writer.) I don’t care what you’ve been told; it’s a copyright violation. Trust me. I actually wrote the book about that topic.

A short time later, a friend of mine began collaborating with Ellie Greenwich on a theatrical project. He played my little rip-off for her. I was told, to my great relief, that when she heard it she laughed.

As far as I know her co-writer and former husband, Jeff Barry, never heard it. But he was a special guest at one of my PD Grad Schools, a really nice guy, and…He’d never hear it anyway.

Thanks for the great (and good and, occasionally, lightweight but fun) songs, Ellie & Jeff.

Meanwhile, here’s the little ditty that Ellie was kind enough to not sue me for.

Next post: I TRIED TO SMUGGLE THE WRONG DRUG OUT OF COLOMBIA: O’Day’s Travel Woes #45

Previous post: HOW TO CREATE 120 FRESH RADIO LINERS PER WEEK — WITH HELP FROM OUTER SPACE