October 1994 (continued): On Thursday night, I flew to Seattle. As I reached my seat while boarding the plane, my shoulder engaged in one of its amusing occasional pastimes: It popped out of the socket. 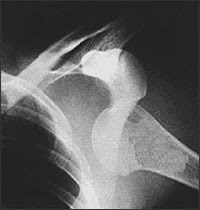 This is an incredibly painful but usually short-lived experience. When it happens, my arm is twisted all out of shape. All I can do is try to manipulate the shoulder with my opposite hand until, somehow, it pops back into place. Sometime this takes only a minute or two; sometimes it takes longer.

This time it took longer.

Needing the space in which to stagger around like a wounded animal and not particularly wanting to provide a sideshow for the other passengers, I made my way to the rear of the plane and frantically tried to repair my shoulder.

Nothing I did succeeded.

I didn’t know if I could even be belted into my airplane seat in that condition. And I certainly did not want to spend the next couple of hours like that.

It had never taken more than five minutes or so to get my shoulder back in place. This time, five minutes passed without any success. Then ten. Then 15. After 25 minutes — literally seconds before the announcement was made to buckle up for take-off — my shoulder popped back in.

At least I had gotten that trip’s bad luck out of the way early. Or so I thought….

Next Week: A nasty run-in with Kenny Loggins.