My November travel schedule continued with two seminars on a Saturday for Al Sprague and the New Hampshire Association of Broadcasters’ Convention in Manchester. In the morning, I conducted THE PSYCHOLOGY OF MANAGEMENT: How to Motivate Your Staff to Peak Performance. The afternoon was devoted to HOW TO CREATE MAXIMUM IMPACT RADIO ADVERTISING.

Apparently the convention attendees responded favorably, because Al booked me to return in 1994 for my fifth NHAB appearance. (Al has a very no-nonsense way of doing business, which I like.)

That night I drove to Worcester, Massachusetts, where on Sunday I conducted my AIR PERSONALITY PLUS+ seminar for any radio station program directors and air personalities who cared to attend. Approximately 100 people from all over New England came for an invigorating day of playing tapes and talking “real” radio.

After the seminar ended, I found myself with a free evening before driving back to Boston to catch a plane home. This was the night of the heavyweight championship fight between Riddick Bowe and Evander Holyfield. 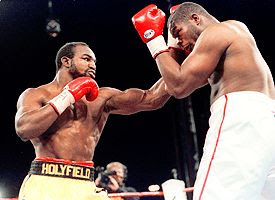 Being a fan of world-class boxing (which, of course, no longer exists), I asked around to see if the fight might be available on closed-circuit broadcast anywhere nearby.

It turned out it was being offered at a sports bar just six blocks away…for a $5 cover charge. Inasmuch as in my hometown of Los Angeles the cover charge for the closed circuit broadcast was $35, I was thrilled. (I also was thrilled to find myself actually leaving the hotel and doing something of a non-work nature during a trip — very unusual for me.)

Even better, the local tourist magazine in my hotel room included a coupon good for free admission to this sports bar. So I didn’t even have to pay the 5 bucks.

So far, so good. I walked to the sports bar, which is located directly across the street from the big arena in Worcester, which that same night was featuring Billy Joel in concert. So instead of holing up in my hotel room and working on my computer, I found myself smack dab in the middle of the action.

I arrived a couple of hours before fight time, to be sure I got a good seat. I managed to get a small table all to myself, right in front of one of the large tv monitors.

Exhausted from the full-day seminar (usually I stand for the entire eight hours), I scanned the menu. I was hungry and I had a couple of hours to kill, so I was looking forward to eating. Being a no-frills sports bar, the menu wasn’t huge. I settled on the chicken burger, congratulating myself on avoiding the fattier and more cholesterol-laden beef hamburgers.

The food arrived, and it was pretty good. I ate slowly, reading a magazine and feeling wonderful. The seminar had gone well, the attendees seemed very pleased, I had enjoyed the walk from my hotel to the bar, I had a great seat for a free heavyweight championship fight — a perfect day.

Or so I thought.

Shortly after finishing my meal, I found myself feeling very drowsy. So drowsy that, as I awaited the start of the fight, I put my head on the table…and fell asleep.

(I realized I was asleep when a waiter came over, touched me on the shoulder, and asked if I was all right. It’s a strange experience for a non-drinker to realize the waiter thinks I’ve gotten drunk and I’ve passed out.)

And it just got worse and worse. Soon I didn’t care who won the fight; I just wanted it to be over. 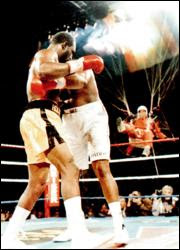 This, you might recall, was the fight that was interrupted for 40 minutes by some jerk parachuting into the ring. Not only did he endanger the lives of the fighters, officials, and ringsiders; he also prolonged my agony.

Finally, the fight was over. I made it outside the sports bar. Being a few hours later, it was a bit colder than when I had walked over from my hotel…but nowhere as cold as it felt to me. As I began walking toward the hotel, I found myself wracked with violent shivers.

(Imagine yourself in Juneau, Alaska, on a January night, wearing a t-shirt and shorts. That’s how I felt.)

I summoned enough presence of mind to realize there was no way I could make it to the hotel on foot. After about a block, I managed to wave down a taxi. Opening the door, I said, “Clarion Suites Hotel. I know it’s just a few blocks, but I’ll give you a five-dollar tip to take me there.”

The driver dropped me off in front of the hotel. I staggered past the front desk — “too much celebrating,” they probably thought — took the elevator to the top floor, stopped my hand from shaking just long enough to get the key in my door, rushed into the bathroom and vomited. Repeatedly. For a long time.

It was while emptying the contents of my stomach that I realized a Life Lesson that I share with you now: When ordering food in a sports bar, do NOT order the chicken burger.

As you’ve probably guessed, I had food poisoning. 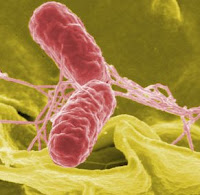 Our friend, the Salmonella.

Thinking about it later, I realized I had ordered the single most risky item on the menu.

You can see when a hamburger isn’t cooked; it’s still red inside. But chicken burgers don’t change color very much. You can’t tell by looking — or even by taking a bite, especially when it’s trapped between a bun and with lettuce & tomato and condiments — if the inside has not gotten as hot as it should be.

If the inside has not reached a certain minimum temperature, any salmonella lurking within will not die. And, as you know, chicken is a much friendlier carrier for salmonella than beef.

I don’t want to get too graphic here. Let’s leave it at this: The entire night consisted of my vomiting for a few minutes, then staggering back to bed for an hour of delirious half-sleep….Only to be summoned back to the bathroom for yet another round of purging.

When daylight came, I realized there was no way for me to make the drive back to Boston for the flight home. Instead, I spent Monday pretty much as I had spent Sunday night.

By Monday evening, I seemed to have exorcised the last of the chicken burger. I called to the front desk and asked if they could bring me some ginger ale.

(By this time, I imagined that to the hotel staff I had taken on the aura of “the mysterious person in the suite on the top floor. He’s had the ‘Do Not Disturb’ sign out all day, he hasn’t left his room since tottering past the front desk last night…”)

Monday night was better. Tuesday morning I drove to Boston, still a little wobbly but enjoying the fresh air. Tuesday evening I was back home in L.A.

And I’ll never eat another chicken burger as long as I live.