I don’t doubt it, but I can’t hear it. He’s referring to music theory and structure, which I barely understand and which he understands to the nth degree.

On the other hand, the other day Spotify segued from Elvis’ There’s Good Rockin’ Tonight to Creedence Clearwater Revival’s Bad Moon Rising…and I realized “Bad Moon” is the progeny of “Good Rockin’.”

If you’re familiar with both records, you might hear what I mean….

I’m sure they were around during Vaudeville, and I’ll wager they existed centuries earlier. 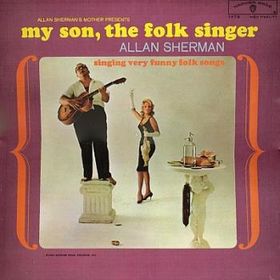 Alan Sherman is recognized by many contemporary song satirists as the father of the current art form.

But it was a song parody that launched the types of nationally produced comedy services that prevail today.

In the early 1980s, Katz Broadcasting put together a team — led by Andy Goodman and The Real Bob James — to create produced comedy features for the five Katz stations across the country.

This small company-within-a-company was dubbed “American Comedy Network,” and they insisted they had no intention of offering the service to non-Katz stations.

From the very beginning, I suspected that’s exactly what they planned to do.

But regardless of their intent, American Comedy Network was changed irrevocably by an integral component of the American communications revolution of the 1980s: the break-up of the telephone company.

In case you’ve already forgotten (or are too young even to remember), the relationship between consumers and “the telephone company” used to be much different than it is today.

For one thing, that’s what it used to be: “The Telephone Company.”

No one had to ask “which one,” because you had no choice.

For most of the country, if you had a telephone in your home or office, you were a customer of Bell Telephone — also known as “Ma Bell” — whether you wanted to deal with Bell or not.

And I’ll bet you almost forgot this part — Ma Bell provided the actual telephones you used.

You didn’t own a telephone; you rented one from Ma Bell… paying for it each and every month, forever.

For the lowest monthly rate, you got an ugly black, rotary telephone.

For a couple of dollars more, you could get a touch tone model.

Or one in a color other than black — but you had to pay extra.

And then the telephone industry was deregulated.

Suddenly, consumers were told they could choose from among a number of long distance carriers.

No longer did they have to rent a telephone from Ma Bell at exorbitant rates; they could go out, buy their own telephone, and plug it into the wall.

Naturally, consumers all over the country responded to the news of their liberation the same way:

To quote Kris Kristofferson — although as I recall, his song wasn’t really about the phone company — American consumers as a group longed for “the freedom of their chains.”

Sure, as a monopoly Ma Bell made huge profits.

Sure, the company treated its captive customers with disdain.

Sure, their newly emerging competitors — like Sprint and MCI — were offering consumers a chance to save money on long distance calls.

But we felt safe with Ma Bell, benevolent dictator though she was.

People didn’t want to have go out and buy a telephone — especially because Ma Bell’s advertising campaign at the time did its best to scare us into thinking that if we didn’t use one of their telephones, we’d forever find ourselves talking into dead transceivers and, probably, our houses would catch fire, too.

One of the pervasive problems was “skipping” — that second-and-a- half delay while the signal went from the earthbound transmitter to the satellite and then back earth— which consumers experienced as an annoying “echo” effect, not infrequently hearing their own voices through the receiver as they spoke.

Believe me, people were upset.

And — with perfect timing — ACN recorded a song parody, to the tune of Neil Sedaka’s “Breaking Up Is Hard To Do.”

Now that you know the history of this song (and of the American telephone system), here’s the parody version.

As I recall, the piece was written by The Real Bob James, Andy Goodman, and David Lawrence; the overall music production was done by Bob Rivers.

The Inside Story of Radio’s “Singing EBS Test”

It’s been decades since my late friend Terry Moss debuted his creation for radio personalities and listeners around the world: the first volume of what became a 5-LP series, Cheap Radio Thrills.

As any old American DJ will confirm, for many years radio stations were required to broadcast periodic tests of the Emergency Broadcast System. Here’s what the listener would hear:

For the next 60 seconds, this station will conduct a test of the Emergency Broadcast System. The following is only a test.

That would be followed by this test tone:

Then the announcer would return to say:

This is a test of the Emergency Broadcast System. The broadcasters of your area in voluntary cooperation with the FCC and federal, state, and local authorities have developed this system to keep you informed in the event of an emergency. If this had been an actual emergency, the Attention Signal you just heard would have been followed by official information, news, or instructions. This station serves the [ ] area. This concludes this test of the Emergency Broadcast System.

Terry decided to change all that — with these two cuts from Cheap Radio Thrills. Here’s the introduction:

After the intro, the test tone would be broadcast. Then this cut would be played, complete with a donut for the announcer to read the boilerplate copy that begins, “The broadcasters of your area…”

Question: As a listener, which test would you be more likely to pay attention to? The one delivered in the bored monotone, or the musical version?

So in its infinite wisdom, the FCC decreed that the Emergency Broadcast System test could not be sung.

After all, you don’t want citizens to actually listen to the instructions which, “in a genuine emergency,” might save their lives.

We omitted it from the CD versions because we didn’t want any stations to see it, assume it must be okay to broadcast, broadcast it and ultimately get in trouble with the FCC.

An Even Dumber Advertising Explanation from Turbotax

Yesterday we took a peek at Turbotax’s current inane ad campaign that spends all its time explaining to consumers concepts they already understand, rather than showing targeted consumers why Turbotax offers the solution to an important consumer problem.

On Monday, they explained why “asking for help” can be a good thing.

Today Turbotax attempts to explain to you the terribly confusing concept of “taking photos of things.”

You certainly can’t fault their logic:

“And because we’re so good at taking photos, we’re also really good at doing taxes.”

Presumably the advertiser is referencing a product feature that includes compiling and analyzing tax information by taking photos of certain documents.

“Well, duh! I mean, people can see it right there on their TV screens,” the ad agency protests.

An estimated 93% of TV viewers in the U.S. “watch” TV with one eye on their mobile devices or on their laptops.

Ask yourself: The last time you watched commercial television, did you sit there and watch & listen when the commercials began?

Has your life in any way been enhanced by viewing or hearing Turbotax’s examples of “taking photos”?

Is the advertising agency making money on this inane campaign?

For years, incompetent ad agencies have filled the airwaves with radio commercials that spend all their time explaining concepts that the audience already understands, rather than delivering a clear, powerful sales message.

Now this advertising malpractice has spread to television.

The first 17 seconds of this ad are devoted to explaining to viewers why “asking for help” can be a good thing.

As an aside: I listened to this spot half a dozen times and still had no clue what was being said at :19.

Finally I ran it through Otter and determined the mystery word is “freelanced.”

The sales message of this advertisement is, “Turbotax can help with your taxes.”

How can Turbotax help with your taxes?

Why would you choose to ask for help from TurboTax rather than from H&R Block, TaxSlayerPro, TaxAct, TaxSlayer, etc.?

Sorry, they don’t have time to tell us.

They’re too busy explaining the almost-impossible-to-grasp concept of “asking for help.”